Morning Glories 24 is the fifth issue of the Truants arc, and the penultimate issue of Season One. It is the first half of the finale, and was initially solicited for release on October 24, 2012. It was released on February 13, 2013.

Sixteen Years Ago: Abraham is overlooking a nursery of swaddled babies. When a nurse asks if he would like to hold his son, he replies that it won't be necessary and leaves the hospital. He meets Reginald Gribbs with the car outside. Gribbs (who calls him "sir") asks about the baby and congratulates him on becoming a father at last. Abraham thanks him and asks if "everything's ready". Gribbs assures him that his plane is on standby, all their operatives are waiting, and there is a guard on his wife and son. Abraham receives a cigar from Gribbs and the rest of the men. Gribbs suggest that they should make their way, they have a long way ahead of them and this is only the beginning. Abraham muses "Ah yes. But there is no beginning is there mister Gribbs? And there is no end. In this nothing ever changes - not for us anyways."

Ten Years Ago: Abraham arrives home and catches his wife and Raul kissing. She was not expecting him and hastily introduces him to Raul. Abraham is uninterested and asks about his son. He's up in the guest suite (having burned his original bedroom). Abraham enters the room and greets a six-year old Ike. Ike asks if he likes the new room and Abraham comments about the "incident with the matches". Ike reveals that he had a dream about a little boy who was trapped in a fire and saved by Abraham. Ike was hoping that if he also set a fire, his father would come home to him. Abraham concludes that it was due to his missing his birthday. Ike claims that he didn't care about that since he got the presents, but he appears to be upset. Abraham is distracted by a watch on the bedstand. He picks it up and asks rhetorically if it's his. Abraham sighs and offers to tell Ike a story. Despite Ike proclaiming that he's too old for stories, Abraham tells Ike the story of Abraham and Issac from The Bible. Ike dismisses the story as stupid, pointing out that either God was lying about his promise that Issac would start a great nation, or that Abraham should have know that Issac wouldn't be killed. The theological lesson is cut short by a call from Benjamin, and Abraham is forced to leave immediately. As he leaves, he tells Ike that the story was not about the terms of the agreement or even God, but about sacrifice and faith. He wishes he could be there for Ike, but he promises that once Ike has inherited all of Abraham's works, he will understand that everything Abraham is doing is so that Ike can have the life he deserves.

Six Years Ago: Abraham and Ike are on Coney Island celebrating Ike's tenth birthday. Abraham mentions that he used to go here with his father when he was Ike's age. Abraham talks to Ike about his current misbehavior; all of Abraham's legacy will be passed on to Ike and there are people watching to make sure Ike is ready to handle all the responsibility. All of the trouble Ike is getting into is making people question if Ike is worthy. Ike agrees, but is more interested in playing one of the carnival games. Abraham gives him the money and goes to buy hot dogs while Ike starts at the booth. Dagney arrives, compliments Ike, and tells Abraham that "he" needs to see him, now. Abraham protests that he is with his son and Dagney tells him that is the reason he should obey quietly. Ike turns around to show his father his success at the game, only to find that he has been abandoned.

Two Years Ago: Ike is in a jail cell after having set fire to one of his father's testing facilities. He expects his mother to bail him out, but is impassive at seeing his father instead (his mother is in Morocco with Raul). Abraham rages at Ike for his irresponsibility and frivolity. He asks if Ike realizes what Abraham has put at risk by dropping everything to help Ike. Ike says that he doesn't, Abraham has been secretive about the family business. Abraham accuses him of being ungrateful and Ike angrily retorts that Abraham has mistaken Ike for one of his "other children". Abraham appears shocked that Ike knows about them and Ike reveals that he found photos in Abraham's desk. Ike also knows about the frequent trips into the desert. Abraham tells Ike that Ike's stunts are a luxury that Abraham provides and that this innocent and safe view of the world is what Abraham is working so hard to protect. But he warns Ike that Abraham can only protect Ike for so long, one day Ike will have to make a sacrifice of his own.

One Year Ago: Ike is bringing a young blond girl to see "how big his office is". This may be the "governor's niece" since he mentions how this would make it hard to get a pardon down the line. However, they find Abraham sleeping in the office and Ike sends the girl away. They greet each other and Abraham comments on how Ike has grown. Abraham says that he went by the apartment, and no one was there. Abraham is apparently drunk and has trouble walking. Ike helps him to the couch and he mentions that he has nothing left to lose. As Abraham sits down, he tells Ike that he doesn't blame Ike for hating him. He feels like he let him down and was not the father he should have been. He thought he was doing the right thing but now wishes he could go back and fix it (or at least be able to explain). Abraham falls asleep and Ike admits that he doesn't hate him.

Ike examines the objects on the desk. There is a last will and testament, an ornate knife, and a photo with "Age 10" written on the back. The photo shows Abraham with several of the children from his camp. Ike leafs through the will and reads that Abraham has left him nothing. Angry, Ike picks up the knife and wakes Abraham. "Open your eyes, father - I want you to see this". As Ike appears blurry to Abraham's eyes, Ike repeatedly stabs him in the chest shouting "Nothing?!!! Nothing?!!! The same for you, then". They look each other in the eyes one last time before Abraham collapses onto the floor in a pool of blood.

David enters the cell with the bloodied and chained Abraham. Reginald Gribbs taunts Abraham, saying that he sees the family resemblance and should let the two talk while Abraham keeps his eyes closed and downcast. Gribbs mocks Abraham for not being able to look his "own flesh and blood in the eyes" but Abraham shoots back that "This wont work [...] and you and I both know why". David approaches the kneeling Abraham, but fades as he does so, disappearing in a spot of haze. Disappointed, Gribbs admits that Abraham was right, "some rules can't ever be broken". Abraham comments that Gribbs always did like a futile gesture. In fury, Gribbs punches him in the mouth and warns him to watch his tongue; if The Headmaster listened to him, "this game would be finished and you'd be on the dying end of it". Abraham smugly retorts that the headmaster "will never listen to a lapdog like you". Before Gribbs can punch Abraham again, he is interrupted by the arrival of a guard telling him about the capture of Ike and Jade.

In a jail cell, Ike is regaling the guards with his tale about the governor's niece while Jade listens in discomfort. When Gribbs arrives, Ike greets him with false joviality, telling him to pull up a chair as he finishes his story. Gribbs asks him if he's aware of the missing children. Ike admits that the guards told him what happened, but protests that he knows nothing about it. Gribbs is suspicious seeing that the two of them are the only two students left on campus. Jade claims that they were making out in one of the lockers. When Gibbs remains incredulous, Jade kisses Ike to prove her point. Ultimately, Gribbs doesn't care how Ike and Jade remained with the campus, he has a theory for how the disappearance was perpetrated and has a solution: Ike has to kill Abraham (again).

Ike smirks and reminds Gribbs that they have already discussed this, although he was once tempted, there's nothing they can give him to convince him to kill his father. Gribbs grins menacingly in response, while Daramount was forcing them to only use positive reinforcement, given her recent failure (losing the children), Gribbs is now allowed to "play rough". He grabs Jade and starts choking her. He states that he doesn't care if they were really making out or not, but he does think that Ike has some sense of kinship with Jade and wouldn't want to see her die. Ike coldly states that he doesn't care about her and that Gribbs can kill her if he wants to. Gribbs calls his bluff: In the academy's eyes, Jade failed her test and is now completely dispensable. Gribbs questions whether Ike can let the girl die to save the father he hates.

Gribbs taunts Ike as Jade begs for her life while choking. Ike suddenly makes a lunge at Gribbs and the guards tackle him to the ground. As he's pinned and helpless, Ike agrees to save Jade by killing his father. As they are walking towards Abraham's cell, Jade thanks Ike for saving her life. Ike ruefully notes that his reputation is ruined but Jade promises to keep it a secret. She can't believe that Ike is really going to do it, kill his own father. Ike reveals that the emotional outburst was a ploy to be able to steal a gun from a guard's belt.

Ike and Abraham greet each other coldly. Gibbs is positively jovial as he presents Ike with a knife with which to kill Abraham. Ike thanks Gribbs, but instead pulls out his gun and lethally shoots Gribbs and the guard in quick succession. Jade is shocked but impressed and hugs Ike. She then apprehensively asks "But, um-- how do we get out of here now?" Ike steps back, points the gun at her head, and replies "we don't". Abraham tries to convince Ike into letting the terrified Jade go. Ike is still furious that Abraham is still so worried about "his precious sub-children". Ike tells Abraham that the academy doesn't think Jade is "one of them" but Ike can tell from Abraham's eyes that she's something special. Using Jade as a hostage, he demands an explanation from his father. 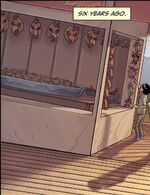 For complete answers to the questions in this section, click here.

Community content is available under CC-BY-SA unless otherwise noted.
Advertisement